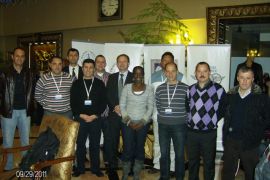 The 3rd Tiger Team (TT) meeting of the WT1/CBRN NTG TRG WG was held in Antalya, Turkey in the period of 14th – 16th November 2011. Based on the decision made during the annual CBRN NTG WG conference held in May in Bratislava (SVK), the JCBRN Defence COE assumed the chairmanship of the WT1/TT.  The JCBRN Defence COE named LTC Vratislav OSVALD the Chairman along with WO1 Ivan HLADIK and WO1 Tomáš ANDR as Secretaries of this important effort.  LTC Osvald facilitated the Tiger Team’s very productive sessions and believes the work is nearly ready for submission to the nations.

Delegates from five (5) countries (TUR, CZE, USA, DEU, AUT) attended the meeting to discuss issues and work out solutions in development of the CBRN CM TRG Handbook.   The aim of this publication is to provide guidelines for CBRN CM training. This document will outline the training considerations to prepare for and respond to a CBRN incident. It should serve as a reference for the development and refinement of CBRN training, education and exercises, but should not supersede national policy. It is designed for possıble CBRN CM military stakeholders who are responsible for planning and conducting CBRN training, education and exercises.

All participants considered the 3rd TT meeting an essential improvement over previous iterations and appreciated the new approach designed to rapidly prepare the CBRN CM TRG Handbook for ratification.  The meeting shifted significantly toward a goal of final ratification at the next NTG WG annual meeting tentatively scheduled for May 2012 in Canada. As of the 3rd TT meeting, the 4th meeting is scheduled for February 2012 in the Czech Republic.

In April 2009, NATO’s Heads of States and Governments endorsed a Comprehensive Strategic-Level Policy for Preventing the Proliferation of Weapons of Mass Destruction (WMD) and Defending against Chemical, Biological, Radiological and Nuclear (CBRN) Threats. The policy, released in its entirety to partners and public, spells out in its mission statement that NATO “will work through a comprehensive political, military and civilian approach”. The new Comprehensive NATO CBRN Defence Concept recommends enhancing and developing the existing mechanisms for Joint Civil-Military CM operations in cooperation between NATO civil and military assets and civilian authorities of the stricken nation. Military CBRN Defence capabilities will also be used outside the military domain when civil population is supported in managing the consequences of a CBRN incident/event. This concept describes NATO-managed civilian capabilities currently available for CBRN CM support.