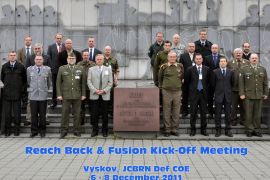 During this meeting, many important issues were firstly introduced or defined such as, operational, development and external support requirements, information exchange, basic organization / structure, possible bodies to be involved and possible involvement of non-NATO countries.

All relevant experimentation activities are expected to be finalized by the end of September 2013.