During the plenary session on the first day, the delegates updated the FP WG Task Matrix and revised the FP WG Terms of reference, in which the JCBRN Defence COE is considered a permanent member of FP WG. Beginning in 2017, the FP WG meeting is planned to be organized annually at NATO Headquarters in Brussels.  The working group will continue to supervise three panels: Doctrine, Organization and Interoperability (D/O/I), led by JAPCC; Training, Leadership and Personnel (T/L/P) led by JF Naples, and the Material and Facilities Panel (M/F) led by AIRCOM. 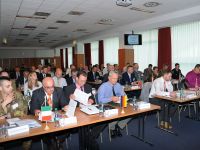 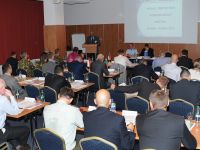 The second day was primarily focused on FP WG Panel tasks. Representatives from the Doctrine, Organization and Interoperability Panel developed a draft Force Protection Policy, which must be finalized and handed over to the IMS. The Training, Leadership and Personnel Panel prepared inputs to the Force Protection Advanced Course, which will be organized for the first time 5 - 9 December 2016 at Joint Forces Command, Naples.  All outcomes from the Panels were presented during the third day of the meeting. 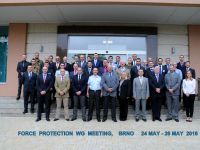 At the end Chairman Colonel Pablo Perreira invited all delegates to participate in the next FP WG meeting, which will be held in Lisbon (PRT) from 22 - 24 November 2016.  He also expressed his appreciation of the admirable organization and support provided by the JCBRN Defence COE.

As of 7th July 2016, Colonel Andrew L. Miltner has taken over responsibility as the new Chief of Staff of the Joint CBRN Defence Centre of Excellence. With more than 30 years of military experience in the United States Army and a solid background as CBRN Defence Officer, he is the perfect person to take over this challenging position. He has already moved to the Czech Republic and will stay here for a regular tour of three years. The CoE-Staff wishes him and his wife Sonmi all the best for their time in Moravia, and Andrew in particular a lot of success in his new responsibility. 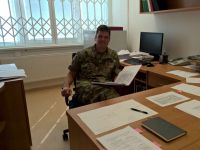 On 13th June 2016, the 1st Deputy Chief of General Staff, Lieutenant General Jiří Baloun, visited the Joint CBRN Defence Centre of Excellence in Vyškov and took the opportunity to award some leaving personnel of the Centre.
Lieutenant General Baloun awarded a commemorative plaque of the Chief of General Staff of the Czech Armed Forces to Colonel Willie Joe Flucker (United States of America) –Chief of Staff, Lieutenant Colonel Stefano Pensalfini (Italy) – Chief of the CBRN Defence Capabilities Development and Defence Planning Section, Lieutenant Colonel Ferenc Menyhárt (Hungary) – Chief of the CBRN Experimental Support Section.
In addition, all outgoing COE members have been honoured by Diploma Laudi Memoralibis for professional attitude and outstanding active involvement in performing NATO CBRN Defence tasks and obligations to support the JCBRN Defence COE, thus improving the CBRN Capacities and Capabilities of this international military organization and its positive perception in the Czech Republic as well as abroad.
Diploma Laudi Memoralibis were awarded to the above mentioned Colonel Flucker, Lieutenant Colonel Pensalfini, and Lieutenant Colonel Menyhárt as well as to Captain Luboš Trudič (Slovakia) and Commander Spyridon Kolovos (Greece) – both Concepts and Doctrines Section. 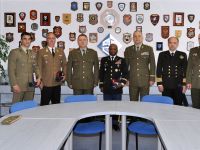 The aim of the exercise was to train CBRN W&R Cells at Joint Task Force (JTF) and Component Command (CC) levels. The training premises and ICT assets of the JCBRN Def COE provided a good-sized environment for hosted team performing the Higher Control (HICON) tasks. 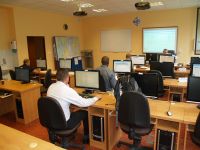 HICON was responsible for generating the inputs to hierarchy-networked CBRN W&R elements and assessing their outcomes. The elements from NATO & Partners’ bodies and nations (AIRCOM Germany, CRR France, HRDC Spain, national elements from Bulgaria, Czech Republic, Denmark, Latvia, Poland, Slovenia and Sweden) were performing the ATP-45 procedures as training audience to accomplish the exercise’s training objectives. CBRN Reachback Element (JCBRN Def COE) was engaged in the Bold Blast ‘16 as well, providing a Subject Matter Expertise for HICON through a reply on Request for Information raised.

All tasks of the exercise were performed well and they confirmed a necessity of preparing and running complex CBRN scenarios for CBRN W&R training purposes as well as following a modern Alliance’s approaches and trends for Education and Training. 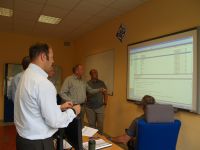 Support to the BOLD BLAST 2016 is conceived as part of long-term contribution to the NATO’s CBRN W&R training activities. The JCBRN Def COE opened the year 2016 by CBRN Analysis Super User Course in March and will continue by Warning and Reporting Specialists Course in October, also planning to participate in other Alliance’s CBRN W&R /CBRN Information Management/ related events.

Over 200 attendees from 7 countries (BEL, CAN, CZE, DEU, FRA, UK, USA) participated in the NATO multinational exercise Clean Care 2016 that was conducted at the military training area Tisá from 19-23 September 2016. This cross-disciplinary CBRN and Medical training event was aimed at NATO interoperability at a tactical level, in order to provide CBRN medical support including the management of any casualty in a CBRN environment from point of exposure through to a Role 2 Medical Treatment Facility. 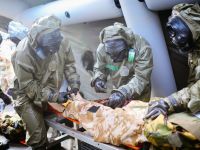 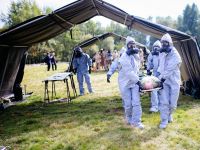 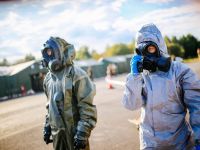 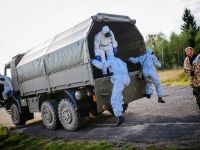