The JCBRN Defence COE celebrated the 5th Anniversary of its establishment on the evening of the 20th of September 2011.  Although officially established 26 Oct 2006, the COE held the festivities in September in conjunction with the 11th Steering Committee meeting in order to take advantage of the unique opportunity to have all eleven sponsoring nations present. The Celebratory Ceremony took place at the Hotel Allvet in Vyškov, Czech Republic.  All eleven Sponsoring Nation’s representatives attended. Other dignitaries included the former JCBRN Defence COE Director Col ret. Radomír Mikeš, JCBRN Defence COE members, Defense Attaches from throughout Europe, as well as numerous other distinguished guests.

The JCBRN Defence COE Acting Director Col Janos Zelenak's opened the Ceremony by welcoming all of the guests and highlighting the long and difficult path that the JCBRN Defence COE travelled thus far.  He pointed out many of the COE's historical milestones, and key supporters; all of which helped build the COE to the competent and well respected organization it is today. 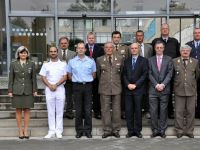 The JCBRN Defence COE hosted the 11th Steering Committee meeting, which was held in Vyškov, Czech Republic on 20 – 21 September 2011.

The SC Chairman - JCBRN Defence COE Acting Director Colonel Janos Zelenak, welcomed all present SC members as well as representatives from SHAPE, ACT, IMS and WMD Non-proliferation Centre. In his opening address, he highlighted the expansion of the JCBRN Defence COE and also expressed his great pleasure for the fact that all SC members attended the meeting for the first time in the COE’s history.

On the first day of the meeting, the SC Chairman presented the JCBRN Defence COE status report to the Steering Committee and informed them about the latest COE project development, manning, internal rotation of COE staff and the successful in-processing of new members.

The meeting began very positively when the Czech representative to the SC declared his nation’s readiness to transfer the HW and SW components of the Modeling and Simulation Cell from the Czech MOD to the JCBRN Defence COE. The JCBRN Defence COE SC accepted the offer and tasked the COE to prepare all necessary legal documents to facilitate the transfer of this unique capability. The suite is based on CZE/USA bilateral cooperation designed to equip the COE with state of the art modeling and simulation capabilities.

The meeting continued with discussion of the Reach Back and Fusion (RB&F) Experimentation Concept. The SC agreed on the proposed two year CBRN RB&F  experimentation concept proposed by the JCBRN Defence COE with the aim to develop new capabilities for the Alliance. 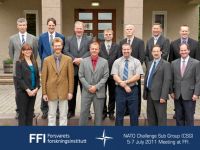 As the Alliance is in the period of transformation process there is a need to specify ways and rules of the transformational changes implementation. In parallel it is required to continue in the support of the regular ongoing missions in CBRN area. Therefore LTC Martin Peša attended Challenge Subgroup (CSG) meeting, which was scheduled for 5 - 7th July to Kjeller, Norway. Representatives from Belgium, Canada, France, Germany, JCBRN Defence COE, Norway, the United Kingdom and the United States met at Forsvarets forskningsinstitutt (FFI, Norwegian Defence Research Establishment).

From 20-24 June 2011 the JCBRN Defence COE hostes the second iteration of the CBRN First Responders Trainers Course  where 14 attendees from 11 countries take part. The event is held under the NATO Civil Emergency Planning and Euro-Atlantic Partnership Council (EAPC) patronage and sets a precondition for opportunity to launch one of the EAPC training centers as a part of the EAPC network, by the JCBRN Defence COE.

Besides the JCBRN Defence COE Staff, a number of the collaborative institutions and universities contribute to the Course Training Program that is based on the International CBRN Training Curriculum for First Responders. The main aim is to increase the value of the response to CBRN incidents and the first responders’ interoperability.

Simultaneously with the Course, the Non-Binding Guidelines Working Group regular meeting is held at the JCBRN Defence COE where a variety of aspects related to the standards for the CBRN first responders are in the agenda.

A team merged from Subject Matter Experts devoted its prowess to the entire result of the experiment. The JCBRN Def COE team (four members) was reinforced by other specialists: (1) Ing. Jaroslav Kareš, Ing. Ota Fišera, Ph.D. – from the Technical Institute of Protection in Brno, The Czech Republic; (2) Commander John Looney from the US Naval Postgraduate School, The USA; (3) Ms. Christine van Burken from the Eindhoven University of Technology, The Netherlands.